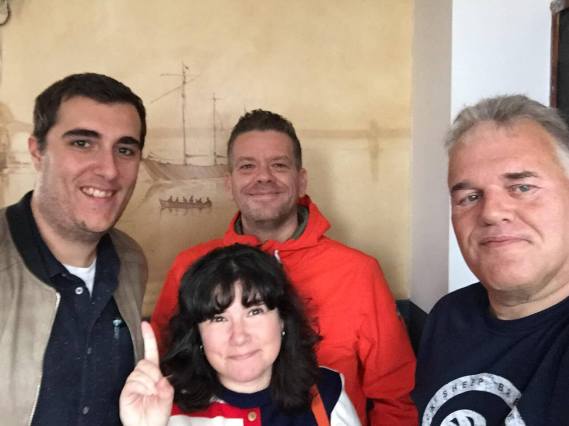 We were due to start at half five to accommodate Biggers who had football duty but ended up at the Dockside at about 5.15pm where the only bitter on offer was John Smith’s. Two halves of John Smiths and half a cider it was. Mark distributed his home made checklists which were immaculately produced on heavy guage certificate paper, and James brought a stamper pen from his work where they make pens. So far the drinking team was a well-oiled machine, but Biggers was late. With two minutes to spare he turned up and nailed a bottle of Stella in about sixty seconds, which gave us some time back. The Dockside had five people in it, one of whom was charging a phone. The pub has little left in terms of it’s Victorian interior but it did have some hand painted pictures of boats, and they really committed to the theme, there were flipping ships everywhere.

Victoriana : You wouldn’t know to be honest 1/5 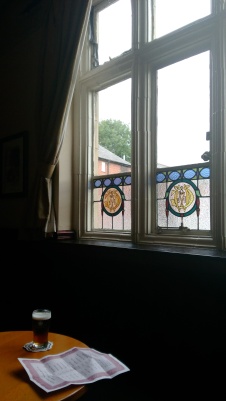 We had the Weaver down as a 5 minute walk, but it was more like 30 seconds so we piled on the time bonuses. The Weaver has a stunning exterior, a big sandstone building which looks better than some places’ town halls with it’s impressive pillars and etched glass. The interior is also faithful with the individual rooms of a typical Victorian pub kept just as they would have been. We were surprised to find it was a Sam Smith’s pub and it being my round I was especially pleased. However, the following atrocity took place. Upon ordering three halves of Best Bitter and a half of Taddy Lager I was charged £7.15 – which was the most expensive round of the day by some margin. Must have been a mistake but as there was much good natured banter about us drinking halves from the locals, one which will cost the Weaver dearly in the points section.

Bonus Points : For the unforgivable overcharging -2/5

The most arduous journey was up a massive hill to the Prospect, the route of which had been bravely reconnaissanced by Mark earlier that day. He had even taken his secateurs to cut back the brambles which, whilst admirable, made me wonder what we had let ourselves in for. Past all the old ICI offices and up to the sandstone cliffs which have a set of pipes and a ladder set into them, we found an overgrown hill path, the type where branches thwack into your unsuspecting face. Safely through the forest of thorns we emerged fifty yards from the Prospect at which point it started to throw it down. We staggered, dripping, inside where we were met with some rather odd glances, repeated the line again that we were drinking halves because we were on a pub crawl and not because we care about our health, and launched into a brand new limited edition beer called Our Heroes. Our Heroes has been brewed by Norton Brewing, one of four Runcorn breweries, from a rediscovered First World War recipe. The sale of it will benefit an appeal to build statues to two local Victoria Cross recipients, so it was extra apt that we tried it. Basically it’s a nutty amber ale which drifts towards brown ale territory and it’s very nice.

Bonus Points : Auld men who were sad we were leaving 2/5

Despite the fact it was still raining we pressed on, eager to keep slightly ahead of schedule. Through Weston Village we went, to the Halton CAMRA Pub of the Year, the Royal Oak. It’s been refurbished to an excellent standard inside but the decor can be a bit gastropub for my liking. Each to their own. We bumped into CAMRA secretary Gary Sleigh and had another three halves of Our Heroes, with James sticking to cider. It was in the Royal Oak that I discovered that Spurs had drawn 0-0 with Swansea in the Premier League and therefore I had won a prize on the Cadbury’s tie-in game. (Too complicated to explain but basically I won a Double Decker).  The Royal Oak was the busiest pub we had been in so far as it was drawing to 7.30pm and people were starting to come out for their Saturday raise of the wrist. It was still raining but we pressed on, conscious we might lose some time on the upcoming epic walk down town.

Beer Selection : Among the best 4/5

Victoriana : Retained fireplaces but gone a bit Laura Ashley inside 3/5

The Roundhouse is about forty seconds walk from the Royal Oak but is a very different pub. No real ales, massive TV screens blaring multiple sports channels, and a lighting scheme which has been designed for either vampires or the growing of mushrooms. We were on the John Smiths and the Strongbow and it was at this pub where we started to realise we had been drinking. Suddenly we were talking about buying houses, the possibility that I had won thousands of pounds on the Cadbury competition (the reveal of the chocolate prize wasn’t until the following Tuesday) and wondering if it was at all possible to not walk for half an hour in the pouring rain to the next pub but instead deny all knowledge of this so-called pub crawl and go back to the Royal Oak. This wavering from our purpose was only momentary, however, like in Lord of the Rings where the hobbits go “Oh fuck it” and almost go back to the Shire because they JUST CAN’T BE ARSED ANYMORE! Soon we were back outside, under an umbrella, ready to take on the longest walk of the day.

Victoriana : You wouldn’t be able to tell it was Victorian, aside from a bit of the room layout 1/5 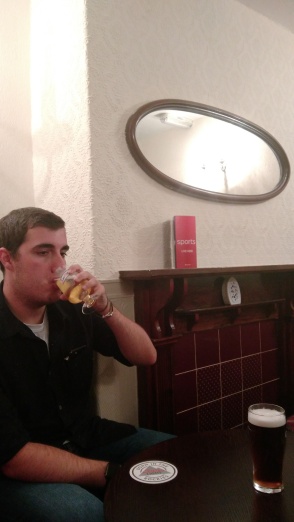 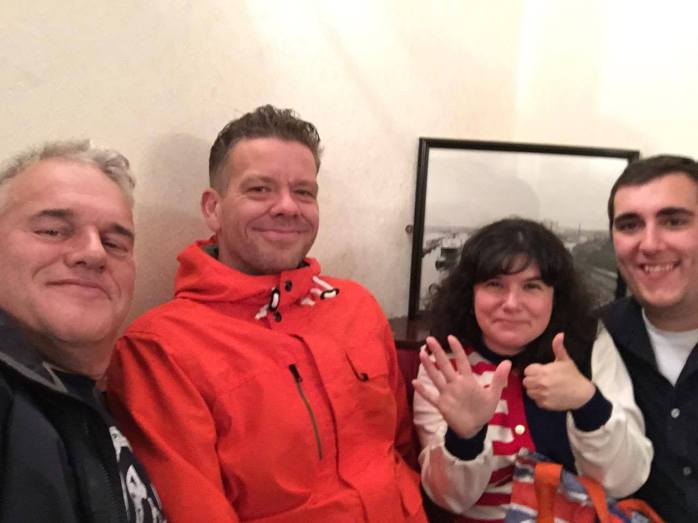 Sometimes, whilst on a pub crawl, a little miracle happens. As we were starting the thirty minute drizzle-beset slog down to the Union, Mike’s brother spotted us and offered us a lift. As the Keeper of the Laws it was down to me whether we accepted this lift or not so I summoned my memories of the Pub Crawl Code, and remembered subsection 4 paragraph 2 : Lifts

If a lift should be offered between points, it may be accepted if two of the following criteria are met ;

Three criteria being satisfied we accepted the lift, and in four minutes we were at the Union Tavern. The Union Tavern is one of those rare Victorian pubs which still has a snug, and so we sat in there to be extra Victorian. The pub has recently undergone a change of management so no real ale as yet, but the darts was on, so swings and roundabouts.

Beer Selection : No real ales but a non-functioning Doom Bar pump. -1/5 for teasing

Bonus Points : The snug being nicknamed the Circus Room because the circus folk who used to rock up to the park behind the pub would always go in there 2/5 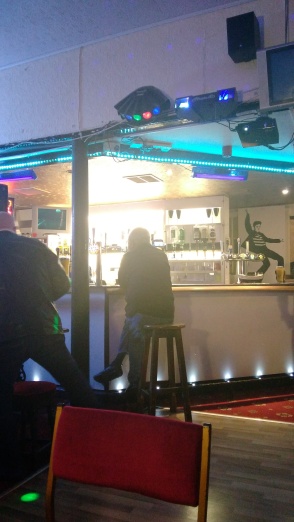 I got to the Grapes every Tuesday for their smashing pub quiz hosted by the smashing Sam Pele Trantum, but on Saturdays the place takes on an air of the working man’s club. Free sandwiches, packed to the rafters, a lady in her sixties constantly asking you for a pound for something or other (bingo, shut the box, open the box, play your cards right, football card, half a mild for Wilf because it’s his birthday). We arrived just before peak time and we were obviously sat in someone’s regular seat because we attracted some quite venomous looks. The Grapes apparently has a ghost from when it was a slaughterhouse so we didn’t hang about.

If this pub crawl had taken place 15 years ago we would have hit another two Victorian pubs between the Grapes and the town centre and possibly been sick, but it’s 2017, the world is an awful place and so the Barley Mow was the next stop. Surprisingly quiet for a Saturday (not in terms of volume, there was a DJ unfortunately for everyone involved). No real ale so it was John Smiths and Strongbow all round. Nothing to write home about, this pub, and we were so keen to get going we forgot to take a picture. 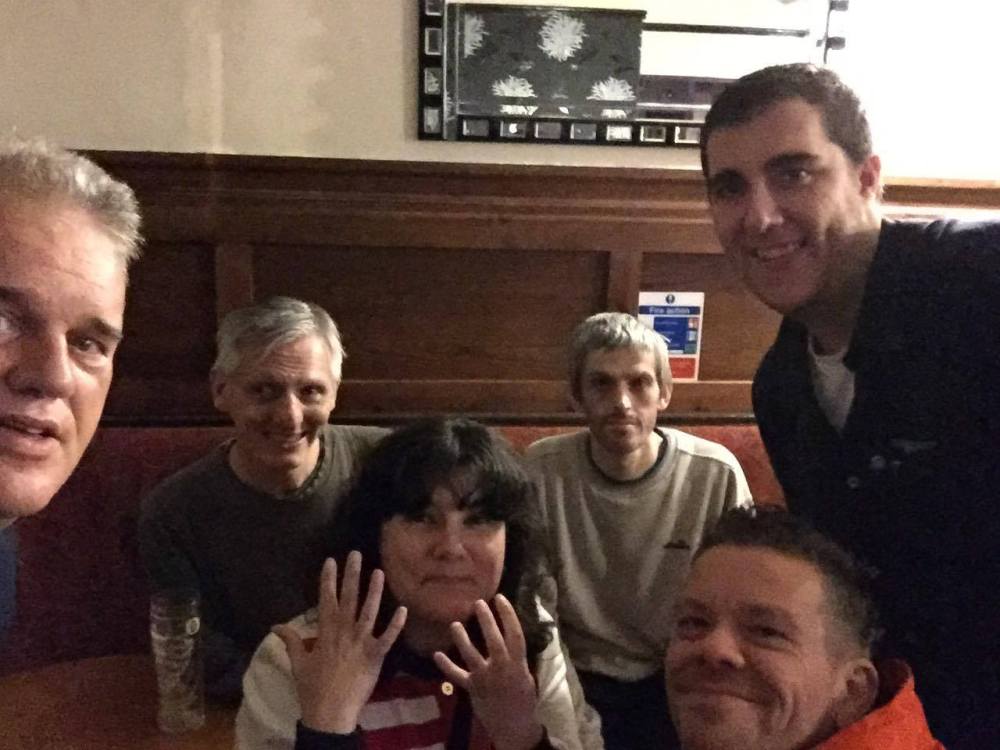 The Clarendon on a Saturday is like the Fall of Rome. Nevertheless it is Victorian pub, and so we tucked ourselves into a corner of the lounge which had a plaque to a dear departed former regular and tried to get through another half of John Smiths before someone decided karaoke was a good idea. Then who should appear but Robert and Michael Scowcroft, our bitter quiz rivals from the Lion on a Sunday night. However, this was not a Sunday and hostilities were replaced by warm welcomes. It’s great when people ‘call in’ to a pub crawl, especially when you’re nine pubs in and sick of each other. The Scowcrofts didn’t get the memo about halves so to keep us all on the same measure we had an unheard of SECOND half in the Clarry before someone started singing My Way and we made a sharp exit.

Beer Selection : Losing the will to live 1/5

Victoriana : Some distinction between rooms, nice fireplace in former snug 3/5

Bonus Points : Addition of two Scowcrofts and an extra half 3/5

The Wellington was rammed and some kind of birthday celebrations were taking place with a very loud DJ encouraging people to do the Caspar Slide. This, along with the fact that none of us were regulars, made it possibly the most embarrassing place to be ordering four halves and then using a child’s ink stamper/pen combo to fill in our little pub crawl game cards. With the end in sight we didn’t hang about in the Wellington, as we wanted to finish the night with time to spare in the Lion, which was our last point of call.

Victoriana : Not much remaining 2/5

The New Dev is widely regarded as the ‘tastiest’ pub on our list. (In the sense that you might get your teeth kicked in, not in the sense that they have a delicious blackberry saison on tap). It was pretty much empty at 10.30pm when we arrived but one delightful gent did saunter in covered in blood before making his merry way out, hopefully to get some medical attention. This was where the Scowcroft’s were to leave us as one was running a half marathon the following day which was an heroic thing to do after 4 points the night before. (He came in the top 50 too, about the same time as the rest of us were eating several bacon butties).

Victoriana : Outside was alright, one point for stained glass on bar surround 2/5

Bonus Points : Escaped with our lives 1/5

At last! After the New Dev, the Lion was an oasis of calm and real ale. I chose to stick to the half pints but the other three decided Pint for Last Pub was the order of the day and they all regretted it later. My memories of the Lion were hazy by this point to see the least but we did actually get there, and we took a photo. There were vague assertions that we would repeat the fun when the nights got longer in March or April 2018. God knows if all the pubs will still be open by then but this most gruelling of crawls had been completed in 6 hours, with no casualties, with a six mile round trip.

Victoriana : Room separation non-existent but etched glass and date of 1867 very much in place 4/5

Total 11/15 making the Lion the winning pub of the night.